Although there are two more lectures to go for the undergraduate course Introduction to Information Systems  (ISOM2010), I have received a student’s feedback about the course.

It is my pleasure to be in isom 2010 course this semester which refresh my mind a lot about the newest trend in IS as well as the details and situations behind them. Before taking this course, I know little about the topics like big data and analytics, however, this course gives me more insights and understanding about them and motivates me to self-learn and read more readings related to machine learning and related stuff. The presentation has also reinforced my understanding about IS concepts as well. The whole course is well-designed, I really love this course a lot and it also triggers me to take ISOM as my major in the future!

The pleasure is all mine. It is a bit early to receive course feedback, but I’m not complaining, especially when the feedback is positive 🙂 It’s always nice to know the planned course activities/readings/topics have some intended effects on some students.

Over the past few years, I have coached a number of undergraduate teams for international case competitions. We would have regular trainings over a few weeks, I would accompany them to the competitions, etc. None of these teams proceeded to the finals despite performing well.

Earlier this semester, I advised two of my MBA students who were participating in separate case competitions. This week, they informed me that their teams did quite well in their respective competitions. One team won the International Business Ethics Case Competition and the other came in Second Place for the Wake Forest Case Competition. All in all, I spent at most 3 hours on one of these teams and not more than 1 hour with the other. So, maybe less is indeed more — less involvement from me = more success for my students 🙂

Just wrapped up the MBA course on digital and social media strategy (ISOM5390). Once again, I’m fortunate to have a great group of eager and motivated students to keep me on my toes. 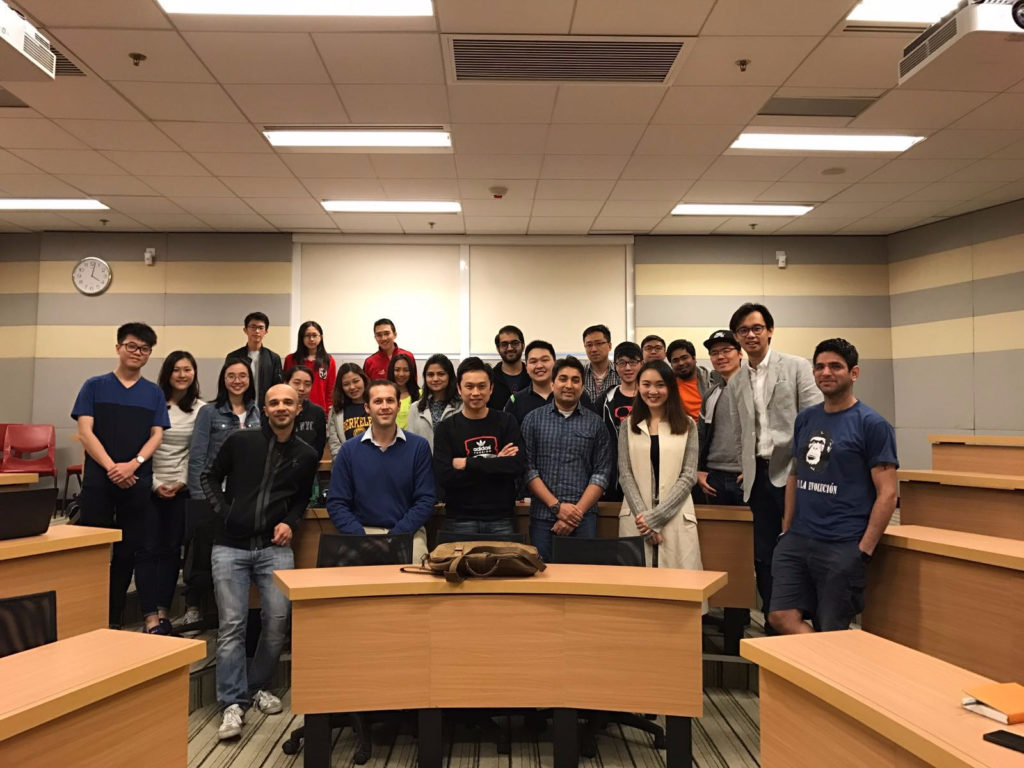 Happy ending with the 2nd batch!

After the last class, I received feedback from some of the students about the course:

Since this class material was new to me, this was not easy task for me. However, I will be involved in the marketing project after  MBA, so this class was practical and helpful for me to understand how to think about marketing. Thank you for your class. If I can, I want to take your class again.

I want to thank you again for your class, it is beyond my expectation. As I mentioned in last class, this course brings fresh knowledge about social media and those guest speakers’ insightful sharing did put us in a real business world, so it was a very pleasant and achieving learning process. Hope more of other future MBA students can benefit from your course!

It is one of the most practical class I had so far. Will definitely recommend to other MBAP (especially marketers). THANK YOU again.

Glad to know that some students found the course valuable.

And I still haven’t checked off the first item on the list.

Offered a webinar on “Platform Disruptions” for the HKUST Business School’s Executive Education Office. It was a pretty fun and eye-opening experience for me. The technical setup was pretty simple; in fact, the technology for conducting such remote teaching seems pretty matured. 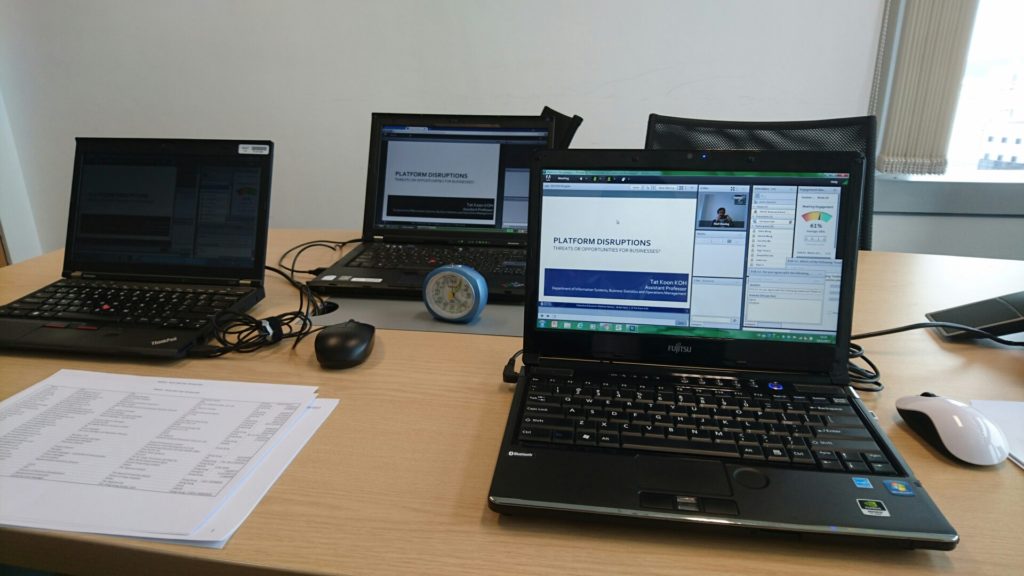 Behind the scene — all the equipment to produce the webinar…

There were about 20+ participants who logged in during their lunch break for 30-min talk. The main challenge I found is the lack of direct interaction between the participants and I. Although you can run simple polls or MCQs during the webinar to stimulate participation and engagement, these just aren’t the same as the interactions in a traditional classroom setting. Would love to challenge myself to give another webinar more creatively.

I developed and delivered a new course on Digital and Social Media Marketing for the MBAs in the last semester. And I was fortunate to have a fantastic group of students for the first run of the course. 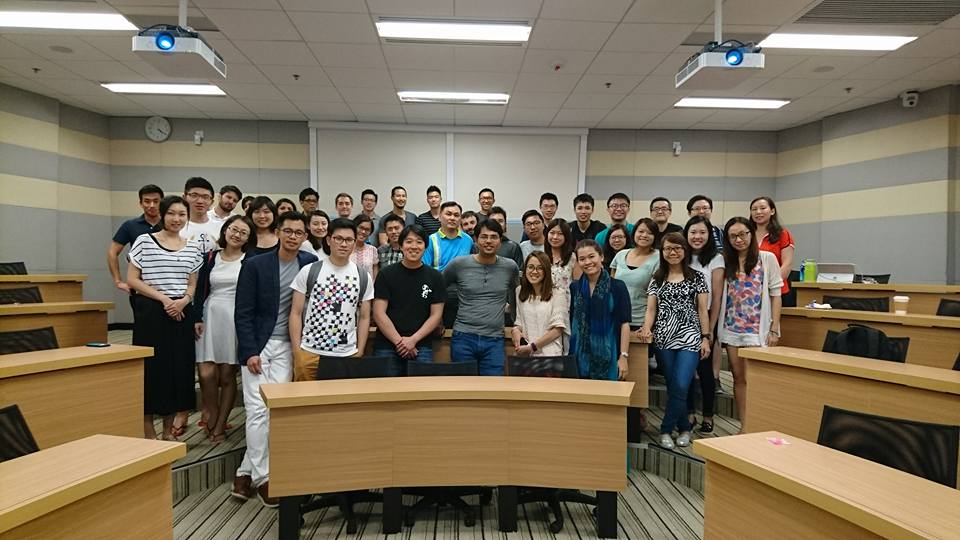 The inaugural MBA class on Digital and Social Media Marketing

I’m quite happy with how it turned out and, based on the the course evaluations, I think the students had a positive experience too. Some of the students’ feedback:

A lot of very insightful digital marketing strategies were shared and discussed in the lecture.

It taught me a new thing because I don’t know anything about digital marketing at the first time. On top of that, the class challenges your logic as the prof keep answering us with new questions that enrich the class discussion.

Looking forward to the next run of the course!

I had the privilege to conduct a workshop on “Platform Strategy” for senior executive from CITIC Pacific. It is always exciting to share insights into my favourite topic with others. A fun exercise during the workshop was to re-model one of CITIC’s existing businesses into a multi-sided platform. 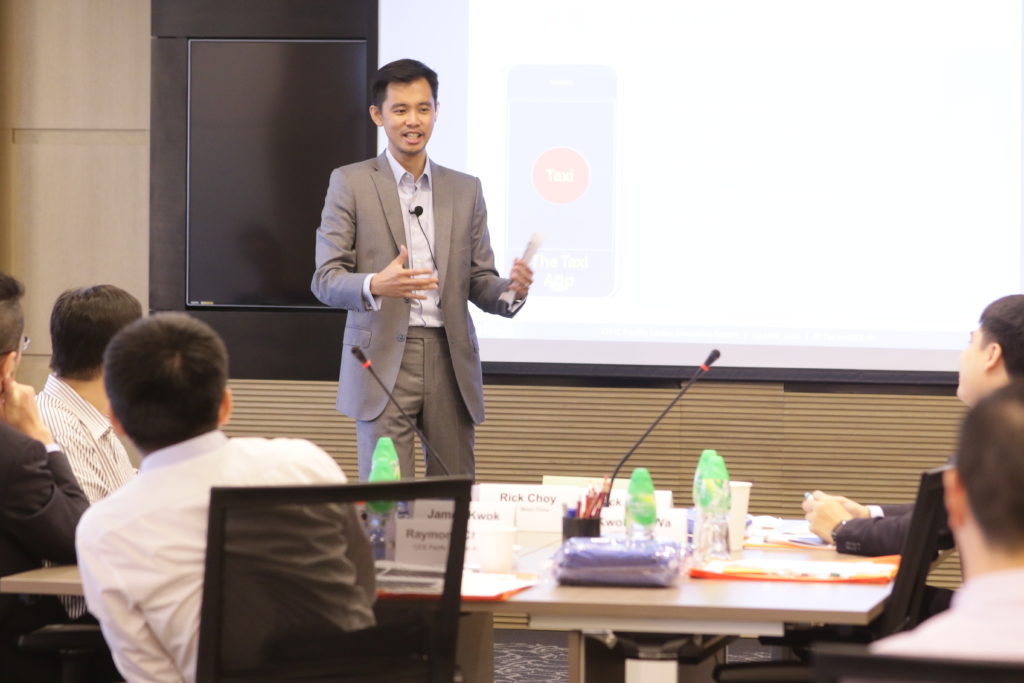 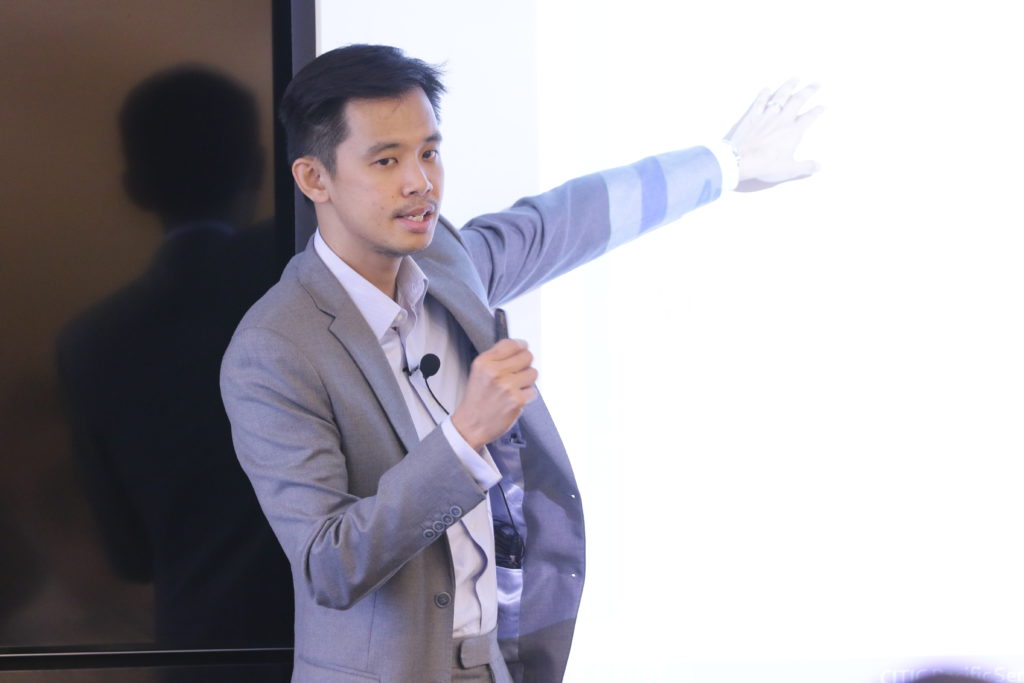 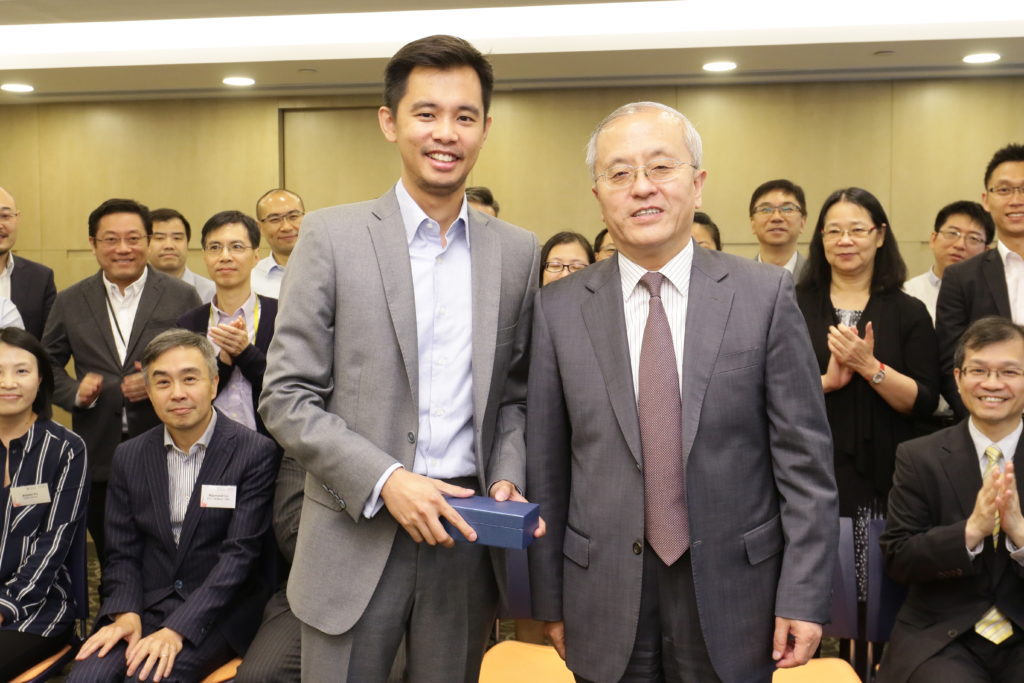 One thing that I enjoy about Executive Education is the challenge to apply concepts into specific contexts that matter to the executives. This really pushes me to think very carefully in planning and delivering the course.

Recently, I changed from JabRef to Endnote 7, and found that Endnote doesn’t offer an easy or straightforward way to sync its reference libraries via Dropbox. In fact, Endnote appears to discourage users from using Dropbox to sync their libraries (see here for example).

My workflow is as such: I store all articles (typically in pdf) in a Dropbox folder so that the files are synced across my desktops and laptops. I also need to sync my bibliography manager’s library file, so that when I add/remove articles (with file attachments and remarks) in the bibliography manager, the changes are applied to all terminals without extra intervention.

Step 1. Create a folder “Endnote” in Dropbox > References. (You can add the “Endnote” folder to whichever folder you use to store your references.)

Step 3. Open Endnote 7. Go to File > New to create a new library “References” (or use any name that you like). Save this library in Dropbox > References > Endnote.

Step 4. In Endnote 7, go to Preferences > Folder Locations. Change the locations of folders for “Styles”, “Filters”, and “Connections” so that they points to the respective folders that have been created in Step 2.

In the other terminals, you can go straight to Step 3 with a minor change^: instead of creating a new library in Endnote 7, go to File > Open Libraries and select the endnote library that you created for the first terminal. (^ Assuming your files sync correctly in Dropbox, those Endnote folders should appear in the other terminals once you have created them.)

Now your Endnote libraries should sync via Dropbox.

A nice way to conclude the undergraduate teaching for this semester 🙂 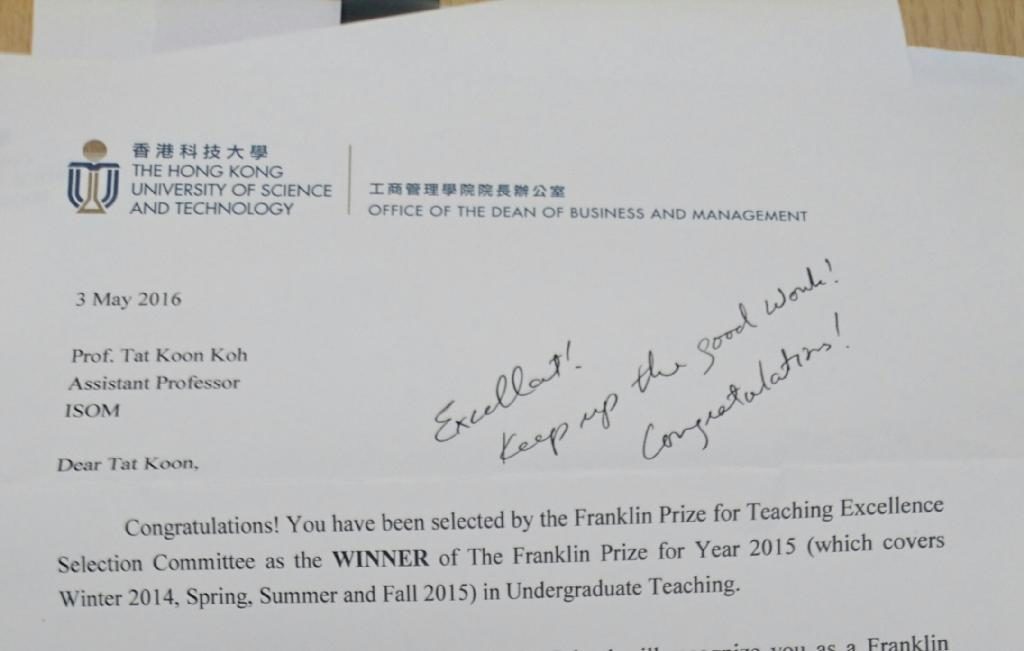 Letter from the Dean – Franklin Prize

Ok, time to go back and get ready for the first lecture of the MBA course….